Female Artists: A Compendium of Imagination

Sometimes meticulous and subtle, other times grand and epic, the beauty of the works by these talented women take the spotlight as they invite viewers to enter their world. 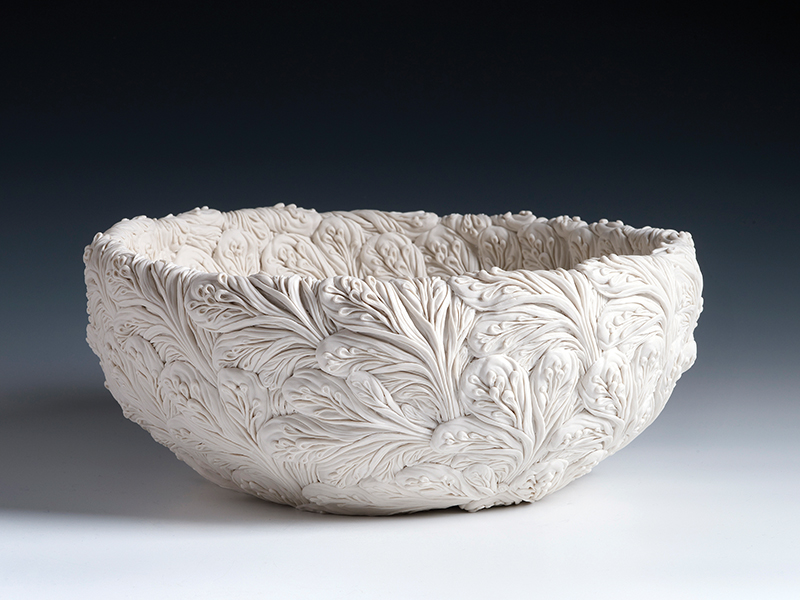 HitomiHosono
The beautiful detailing of the Japanese artist’s ceramic works speaks volumes about her inspiration. It started when she sculpted a leaf she found in her garden at home. “It was a simple leaf, not particularly special amongst other leaves.  However, when I started sculpting its shape with clay, I was drawn into its intricacy; the manner in which the veins were branching, how the margins ended. I found many details that I admired in this small leaf. It is my intention to transfer the leaf’s beauty and detail into my ceramic work, using it as my own language to weave new stories for objects.”

Hosono initially developed her technique from Josiah Wedgwood’s Jasperware, which applies thin ceramic reliefs or “sprigs” as ornaments to decorate a bigger piece. Her experiments allowed her to move away from the traditional use of the technique and she now covers the entire surface with sprigs or even constructs a piece from many layers of sprigs. The results are intricate ceramics brought to life by flowing leaves and branches. At a glance, they look like a minimalist version of nature, with each botanical element seeming to move and blend together harmoniously.

She plans to take on larger-scale, more complex constructions while expanding her library of knowledge on botanical life to show more of its dynamic energy – definitely something to look forward to. 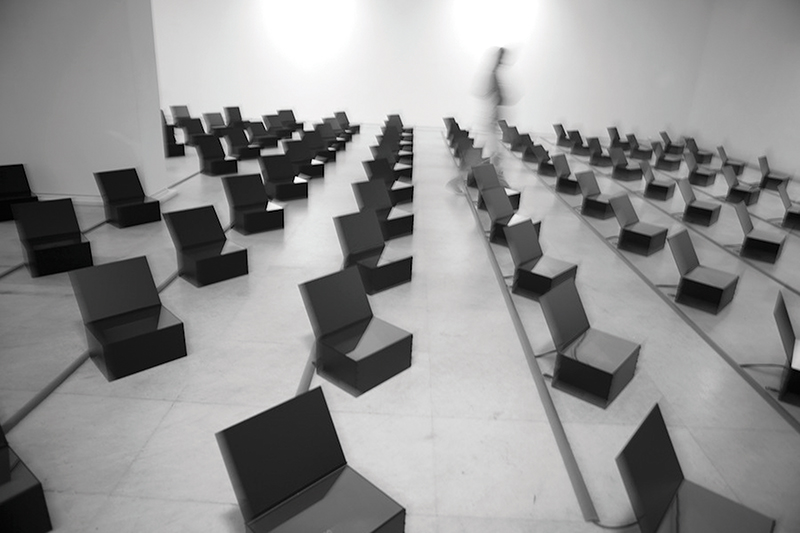 DanaeStratou
From audiovisual environments to large-scale installations, DanaeStratou is an artist who challenges the senses. “It’s Time To Open The Black Boxes!”, for example, comprises 100 black boxes geometrically positioned on the floor displaying various words along with a countdown or count-up before emitting sounds of tension and alarm. These represent her reaction to various socioeconomic crises in the world and the fear-induced paralysis that befalls people in crisis situations.

“Desert Breath” is perhaps one of the grandest landscape artworks, covering an area of 100,000 in the eastern Sahara desert bordering the Red Sea in El Gouna, Egypt. She teamed up with Alexandra Stratou and Stella Konstantinidis in D.A.S.T. Arteam to create two interlocking spirals, one consisting of protruding cones of sand and the other of cones carved into the dunes.  The cones grow smaller as they reach the circular water pond in the center. The desert itself represents a place where one experiences infinity, and the team addresses the desert as a state of mind. The point of departure was the conical form, the natural formation of the sand as a material.

The site still stands although it was predicted to only last for six months, but you can see it from your computer through Google Earth, which might give you a better look than the installation itself as it is slowly disintegrated by the elements. 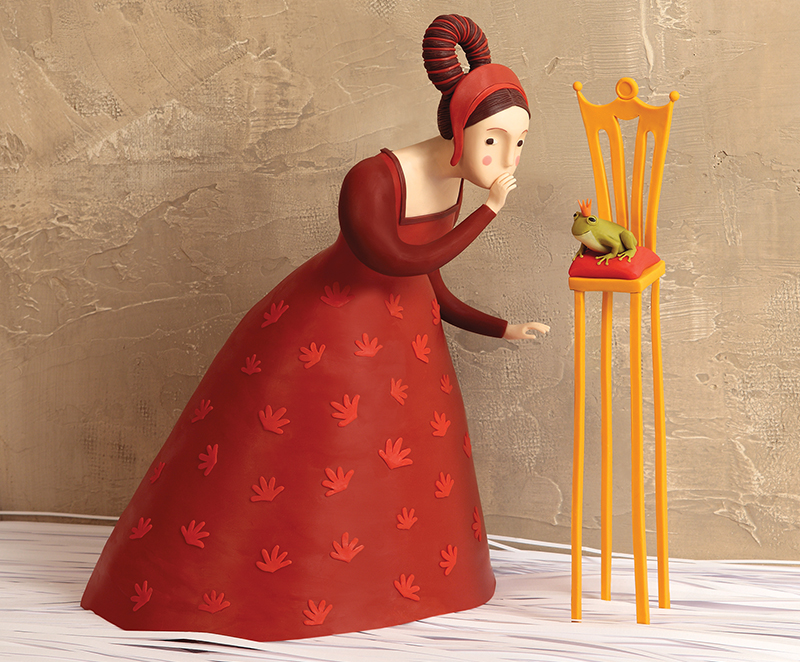 Irma Gruenholz
At first glance, Gruenholz’s works are clear, minimalist and simple. But look closer and you might be surprised by the amount of work put into each illustration.

Irma Gruenholz specializes in clay illustration, which means creating concepts on a scene, drawing sketches and finally sculpting and painting plasticine or polymer clay and combining them with various materials such as paper, metal, wood or other objects. She arranges the lighting to create the proper atmosphere, takes photographs and only then is the “illustration” done. The whole process may take between two or three days for simple illustrations without a background – and up to a month if it requires a complex model.

Her approach is to work with visual elements efficiently, each with a specific function instead of merely using it to decorate or fill the space. She also limits her color palette to create a warm and natural ambience. “I like to be concise in my illustrations and find the easiest way to convey a message with the fewest possible elements. It is a legacy of my background in graphic design: ‘less is more’. A simple image is easier to read by the viewer,” Gruenholz said.

The latest book she has illustrated, “Il Ballerino del Silenzio” by Ivo Rosati, was awarded a Special Prize at the Nami Island International Illustration Concours in South Korea. 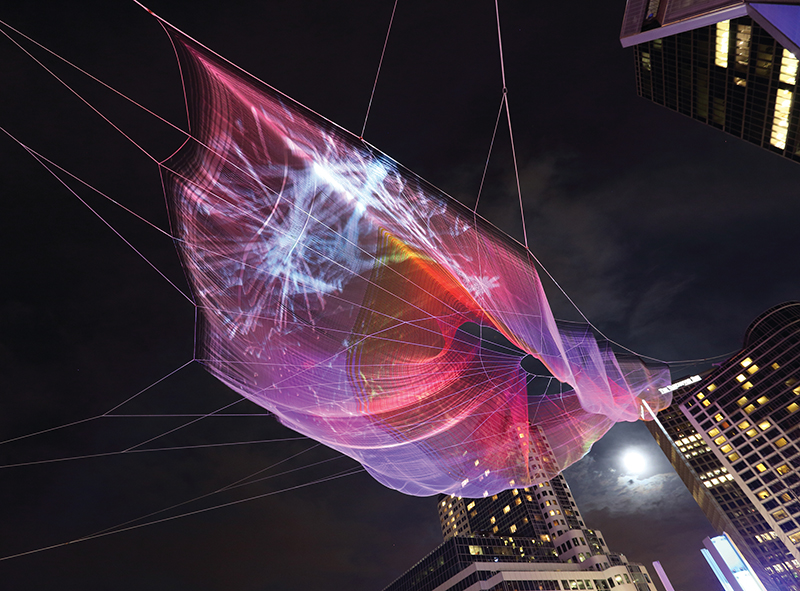 Janet Echelman
Inspiration may come in the most unexpected time and place. When her painting supplies never arrived at the Indian village where she stayed, Echelman’s attention fell onto the fishing nets used by the locals and she wondered how they would look like when hung and illuminated in the air. Soon, she found herself treading a new approach to sculpture: a way to create volumetric forms without heavy, solid materials.

Her net installations, the fusion of art and technology, are defined as living, breathing sculpture environments that respond to the forces of nature-wind, water and light-and become inviting focal points for civic life. The larger scales are usually suspended from building to building, changing the occupied spaces into inviting, experiential wonders.

Studio Echelman’s latest work, “Skies Painted with Unnumbered Sparks” is her largest and most interactive installation to date, spanning 745 feet between the 24-story Fairmont Waterfront and the Vancouver Convention Center in Vancouver, Canada. Visitors may choreograph the lighting in real time using physical gestures on their mobile devices thanks to Aaron Koblin from Google’s Creative Lab.

The sculpture is made of lightweight, durable fiber that can react to the wind instead of breaking under its pressure while remaining weight-efficient for shipment. Woven by hand and machine, its initial model was created with the help of custom 3D software by Autodesk to reach its current scale and complexity. 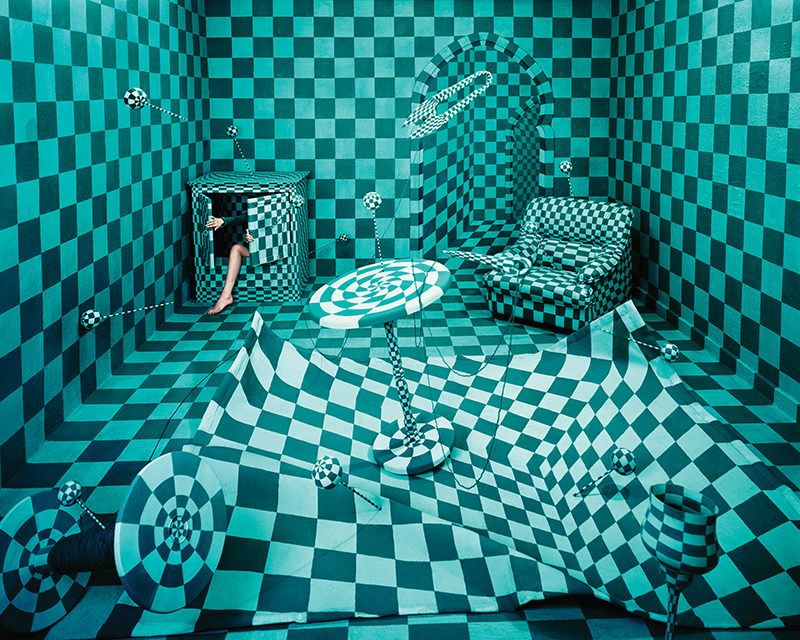 Lee JeeYoung
Constructing surreal worlds in her bedroom-sized studio, Lee began her search for personal identity through an ongoing mixed-media-installation-cum-photography project titled “Stage of Mind” since 2007. For weeks-sometimes months-she would create the fabric of a universe born in her mind and inhabit it only to tear it down and start from scratch again.

In each photo, Lee is the protagonist, showing parts of her body or facing away from the audience. Through bold materials and patterns, dramatic colors and intriguing narratives, Lee tells legends and proverbs to the backdrop of her own dreams and childhood memories. In “Panic Room” for example, objects fly off in all directions absurdly, with a dizzying pattern covering the whole surface. She can be seen hiding in the closet, the place she deems secure from her chaotic, disquieting surroundings.

Another personal piece is “Black Birds”, in which large birds represent the things that frighten her, coming out from the doors of change and the challenges she has to go through. Meanwhile, “Nightscape” was inspired by the old Korean traditional landscape paintings. She worked with a master fan-maker to adapt them into her very own scene of a night inside a forest.

If you would like to check out more of her works, head to her solo show during MIA (Milan Image Art fair) on 23-26 October 2014 in Singapore.

Titarubi
The Indonesian artist doesn’t limit her choice of mediums to convey her ideas and social criticism. From sculptures, installations, performances, happenings, paintings to graphics, she has collaborated several times with musicians, theater artists, dancers and filmmakers to explore issues of the body, identity, gender, memory and colonialism.

For the “Suspended Histories” exhibition in Museum Van Loon, Titarubi produced a monumental sculpture titled “Imago Mundi”. The torturous history filled with massacre and manipulated prices surrounds nutmegs, a highly valuable spice in the past from the Banda Islands, which is represented by a large robe made entirely out of metal and gold-plated nutmegs.

Titarubi also challenged Michelangelo’s David into “Surrounding David”, making a replica out of fiberglass and enlarging it to almost twice the original size. She then covered the whole surface with floral brocade, a fabric used in traditional Indonesian women’s clothes. The brocade itself is transparent and skin-tight to expose feminine curves, but on Titarubi’s David transmutes the idyllic masculine naked body into feminine aesthetics, sensuality and sexuality. Instead of solid muscle and sinew, he now looks weightless, transparent, with a beam of lights radiating from the inside.

Titarubi always takes on new challenges and is unafraid to raise a few eyebrows. She is working on her next project, an underwater installation in Padang Bai, Bali and KarimunJawa Islands.

ARTE
Indonesia Art Festival 2014
Dedicated to Indonesian artists and art lovers, the annual event comprised various segments including Visual Arts, Performing Arts, Film Festival, Culinary Arts and Art Market. In its second year, ARTE did not only invite selected artists to exhibit, but was also open for submissions of various techniques and mediums. There were 72 artworks from 57 artists selected based their relevance to the “Re:generation” theme.

Among the young female artists whose works were displayed, KireinaWindiah H.M. captured the abuse of digital technology and its influence on society’s obsession with beauty through various media artworks titled “Natural Beauty Advertising Series”, “Browse for Your Face” and “Plastic Surgery Description Box”. Meanwhile, IndinaAstriAndamari used a kinetic installation on painted acrylic gears titled “Mechan Is M(e): Phases”, representing the wheels of life in an unending search for a new self.

From the six invited artists, MarishkaSoekarna presented “Panty Theory”, a set of three panels depicting the life phases of a woman – childhood, adulthood and motherhood – based on her underwear.

To her, underwear used to cover up, protect and maintain the body but also reflects on intimacy and a woman’s personality.