Yudhi Harijono: From a Craving to a Passion 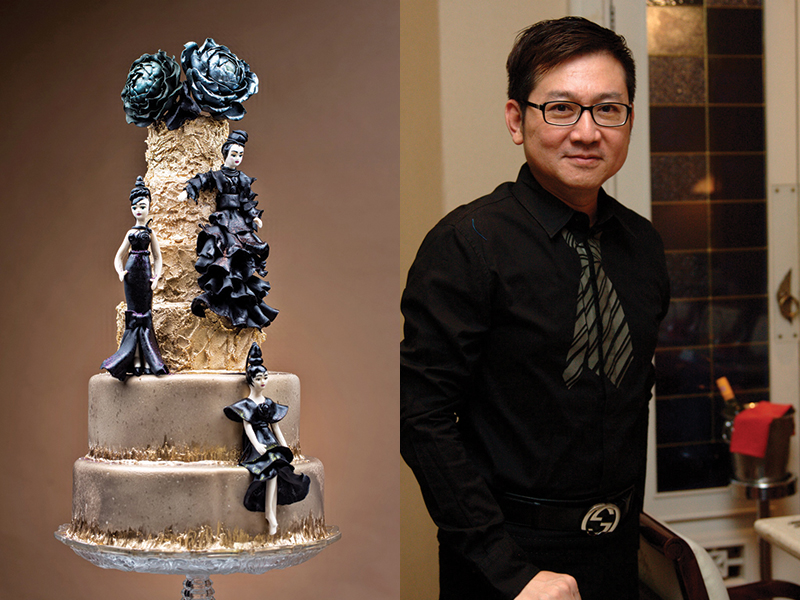 Beautifully decorated cakes – you either love ‘em or hate ‘em. You might love how gorgeous they look, or hate that you don’t have the heart to eat them because they’re too gorgeous to ruin. Cake decorating is an art form, and Yudhi Harijono is an artist renowned in Southeast Asia. His creations are a feast for the eyes, from cakes embellished with edible jewels to a cake tower painted to look like Chinese porcelain.

Yudhi has always loved to cook. He began learning how to make cakes in NYC to satisfy a yearning for the traditional Indonesian cakes he’d had back home. He quickly learned how to improvise and create his own cake recipes, but he discovered a whole new world of cake decorating when he watched a TV program featuring Collette Peters. Without realizing that Collette was a famous cake decorator, he rang her up and asked to join a course. He walked into the class and was stunned to see that his fellow students were pastry chefs from famous hotels, and realized belatedly that he had signed up for an advanced class. Unwilling to wait three months for the next basic class, he pushed through it and impressed Collette despite it being his first time decorating a cake. What’s more, he found his true calling.

From then on, he worked to improve his skills while experimenting with new ingredients. He’s constantly on the watch for new techniques to absorb. Yudhi also emphasizes making edible pieces. Everything on his cake must be edible, whether nor not it ends up getting eaten. “The most important thing is creativity,” he said.

Fondant is mainly used to create the decorative elements, and is hardened using food-friendly chemicals or egg whites. Every cake is customized to the order of his clients, which include companies, socialites and even ambassadors. The time it takes to create a cake can range from one day to two weeks, depending on how elaborate the decoration is. The most expensive cake Yudhi has made costs more than US$300,000 and was covered in edible gold leaves. But when asked about his most favorite creation, he answered, “My latest creation always becomes my favorite one, because there’s always something new in it and I put everything into it.”

Don Pao itself offers pao with a twist. Instead of the normal white, round pao with smooth surface, Don Pao’s steamed buns are specially cast and come in many colors, depending on the fillings. Among the fillings are Beef Black Pepper, Chicken Char Siew, Cheesy Melt, Chicken Mushroom, Japanese Green Tea, Red Bean, Chocolate Lava and Salty Egg. These steamed buns can last up to four days in the refrigerator and up to a month in the freezer, but they’re best served warm. They are packaged individually but also available in boxes of 10 or 20 pieces if you want to bring them home or give them away as a gift.

On the beverage side of things, Don Pao offers hot and cold drinks including Nespresso coffee and English Organic Tea. Be sure to try the Red Velvet, a cold drink with whipped cream, jelly and topped with Hershey’s Chocolate Syrup.

With an interior design that resembles a post office, Don Pao believes that the joy of receiving a pao mirrors the elation of receiving a letter in the mail. After its first establishment in Surabaya, Don Pao recently opened in Pacific Place, Jakarta. Yudhi and his partners plan on opening at least four more branches in Jakarta this year. You can also look forward to new fillings and even shapes for the pao.