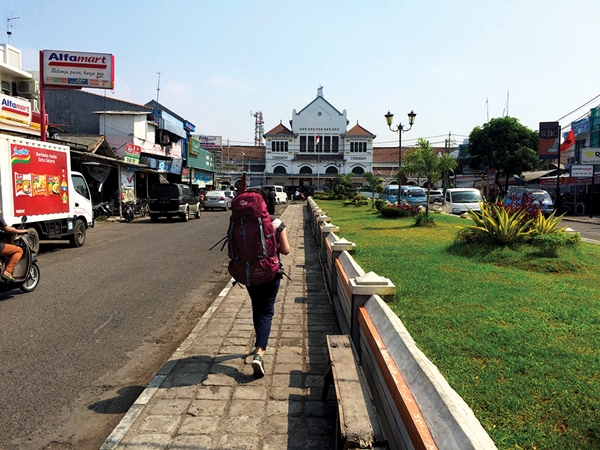 In the densely populated island, West Java is mostly dominated with Sundanese culture and rich with history. The undeniable beauty of its mountainous area and green valleys are made complete with fun destinations for the whole family. Start your exploration from Cirebon, Bandung and Bogor, and then explore the rest of the province.

There are two old palaces in Cirebon where you can go back in time. Keraton Kanoman was the beginning of Cirebon Sunanate and the witness of Islamic history. Keraton Kasepuhan was built in 1529 and a symbol that Cirebon Sunanate was the successor of Padjajaran Kingdom, with influences of Hindu architecture. There’s also the Agung Sang Cipta Rasa Mosque within the keraton’s complex. 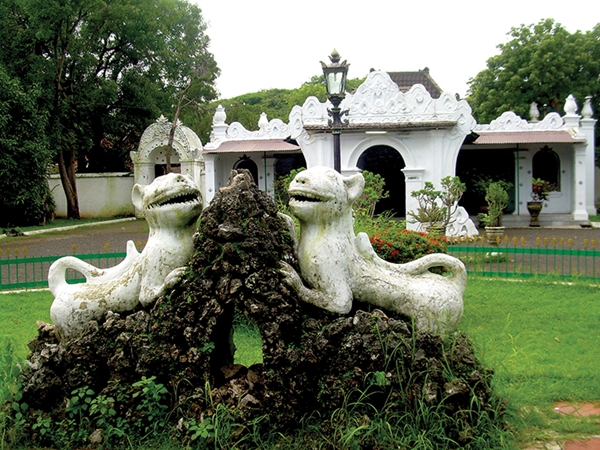 Nature lovers will enjoy exploring the many water destinations. Rent a boat at Kejawanan Beach, take photos at Remis Lake, see the sunset at Situ Sedong or dip into the hot springs at Banyu Panas Palimanan.

Less than an hour away from Cirebon, Kuningan is easy enough to reach but distant enough from the hustle and bustle to make it quaint. Cipari Archeological Park located at the foot of Mount Ciremai offers a slice of a prehistoric life from the megalithic era. This site was recognized when a sarcophagus was unearthed in the 70s, initiating further excavations.  At the foot of Mount Ciremai and located near the camping site is the Putri Waterfall. The clear, fresh water and charming greenery can easily make hours go by. Take a swim or at least take your shoes off to walk in the cool, shallow water.

Siwalk is a tourist park for the whole family with activities ranging from off road ride, lake water boat, outbound area, golf and camping ground. Meanwhile Cirebon Waterland Ade Irma Suryani is dominated with three pools and cottage area facing the sea for those who want to stay longer. There are a lot of places where you can buy souvenirs. Batik Trusmi offers quality batik fabric, including Cirebon’s signature megamendung pattern. For snacks and other food products, try Kanoman Market, Pagi Market, Daud Shop or Pangestu Shop. 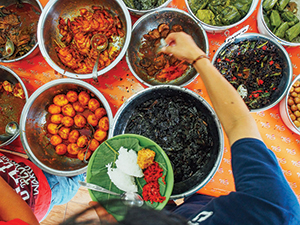 Of course you can also enjoy Cirebon’s delicacies right in the city. From uniquely prepared beef dish Empal Gentong, rice with side dishes served in jati leaf wrapping, to skewered buffalo meat called Sate Kalong, every day is a culinary adventure.

In the city, Jalan Asia-Afrika is a street rich in history, named after Konferensi Asia-Afrika (also known as Bandung Conference) held there in 1955. You can visit Gedung Merdeka, a building originally built as a club house during Dutch colonial era, and check out Museum Konferensi Asia-Afrika, which hosts memorabilia from the historical conference. Nearby, a landmark called Tugu Titik Nol marks the point where the city was first built under the command of Governor-General Daendels.

A popular spot that has been getting massive popularity online for its breathtaking view of the Dago valley, Tebing Keraton means ‘natural splendor’ in Sundanese, and is just about half an hour away from the city center. From the parking area, you can either trek the 5km hike or get an ojek to take you to the top. Either way, you will be greeted to one of the most beautiful view in Bandung. 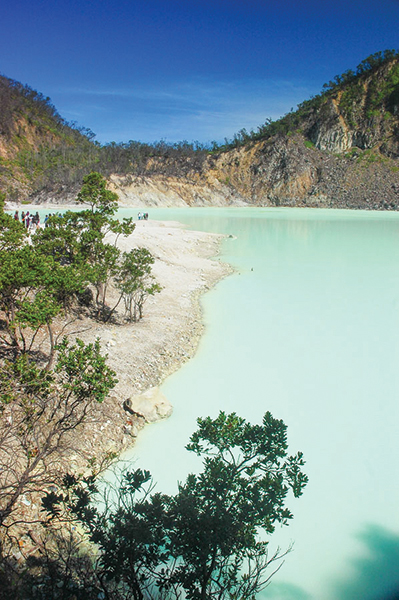 Another striking scenery lies at Kawah Putih or White Crater at an active volcano in West Java that used to be a sulfur mine, hence the strong sulfur smell. Its striking white-blue color and easily accessible location makes it a popular spot among the locals. From Kawah Putih, make sure you also check out the Situ Patenggang lake, Ranca Upas area, Ciwalini hot spring, and the Ciwidey strawberry farm. 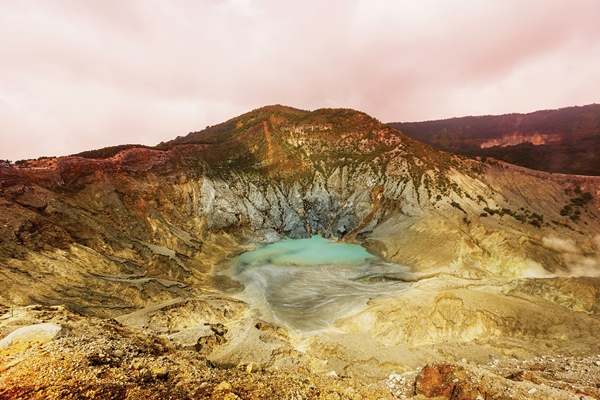 Literally means ‘upturned boat’ for its shape, Tangkuban Perahu is another active volcano located about 30 km north of Bandung. It is a popular tourist attraction where you can hike or ride to the edge of the crater to view the hot water springs and boiling mud.

Trans Studio Bandung Theme Park is the second indoor theme park in Indonesia after Trans Studio Makassar, and is among one of the biggest indoor theme parks in the world. Divided into 3 different zones, the park has 20 rides and a wide variety of shows. Visitors will feel the experience of becoming a star also become part of favorite TV programs in TRANS TV and TRANS 7.

The Lembang area is perfect for family with various tourist destinations. From the Farmhouse with its “hobbit” houses, the hills of Dusun Bambu, the rides and attractions of Kampung Gajah Wonderland, and the relaxing Maribaya natural hot springs, there are something for everyone.

When people go to Bandung, factory outlets are usually their shopping destination. Basically boutiques selling ‘factory’ rejects branded items at bargain price, Setiabudi, Riau and Juanda are among the streets lined up with the most popular factory outlets. Meanwhile, Jalan Braga is a top tourist attraction with shops, eateries, and a shopping mall.

Don’t miss out on Bandung’s street food such as Soto Bandung, Surabi, Batagor and Cireng. For dining out, there are chic cafes and restaurants all over the city, including the traditional and natural-themed Kampung Daun, The Peak Resort Dining with its amazing scenery, and Miss Bee Providore recently popular among youths and families. Indonesia’s first and foremost botanical garden, with 87 hectares of beautifully kept trees, plants flowers, lawns and ponds, Bogor Botanical Garden is both serene and refreshing. You can see the marvelous 300 years old Bogor Palace from afar or visit the zoology museum and orchid nursery among others. 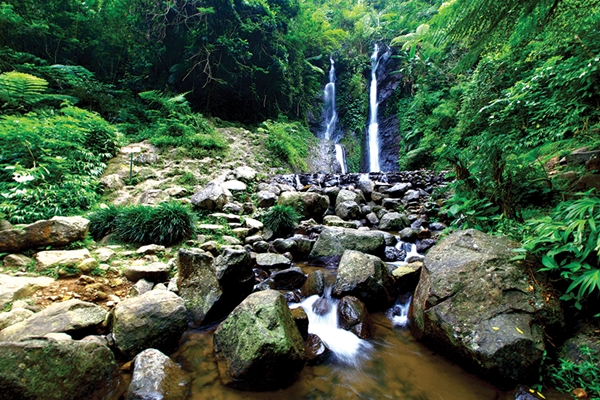 Experience more nature by visiting Curug Cilember located in a village in Cisarua. Consisting of seven consecutive waterfalls, it’s certainly worth a visit for light trekking lovers. Other waterfalls around Bogor include Curug Nangka and Curung Leuwi Hejo, both offering clear air and lush foliage. 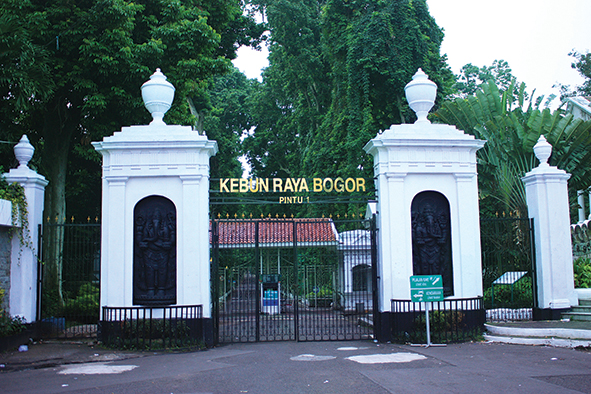 See how the traditional Sundanese people lived their day to day life at Kampung Budaya Sindang Barang. This village is at least 100 years old, and since 2006 has gone through massive restoration. Other than learning about the history, visitors can also learn traditional musical instruments, dance, trek and fish around the area.

Started in 1930, Taman Safari is a conservation center as well as a modern zoological garden with a collection of over 2,500 animals from Indonesia and all over the world such as komodo, rhino, bison, sun bear, white tiger, elephant, anoa and penguin. After touring the animal habitats with your car, or the provided bus if you don’t drive one, you can see more animals, activities, amusement areas, restaurant, and many more in the area. 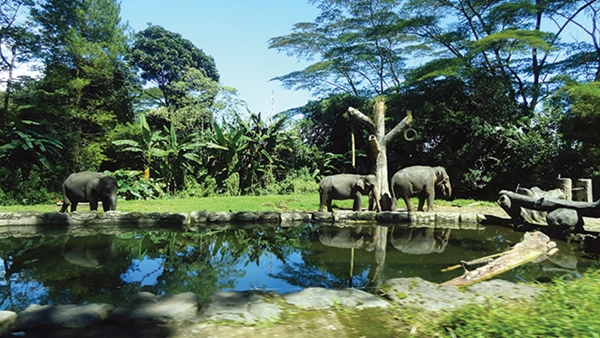 In Sentul, Jungleland Adventure Theme Park spreads across 35 hectares and consists of 4 zones with rides, attractions, parades, the biggest Science Center in Indonesia and Jungle Water Adventure waterpark. Another popular waterpark with numerous inside and outside the water attractions is Marcopolo Water Adventure, where you can also try flying fox, giant balloon and 4D cinema among others.

A popular local pizza restaurant, Kedai Kita, is located not far from the equally famous Pia Apple Pie and Chocolava. It serves wood fired pizza and other Italian favorites at affordable price. Meanwhile, Cimory, which started from a milk producing company, has now expanded its brand to successful restaurants in Puncak area with the same name, offering western dishes paired with fresh dairy products. Cimory Riverside, an airy two-floor restaurant and store offers a beautiful view of the Ciliwung River that flows from the mountains, all the way to Jakarta. 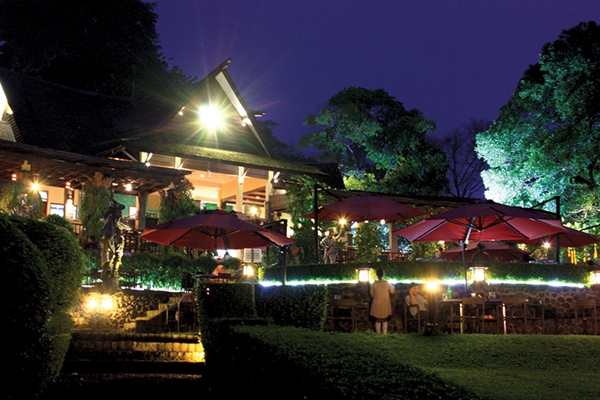 For shoppers, Tajur is famous as the center of bag home industry. Some factory outlets, similar to those found in Bandung, are available in the city. You can also choose to shop in the many modern shopping centers such as Bogor Junction and Botani Square.