Lavishness that comes as natural as breathing.

Officially opening its doors on September 9, 2021, The Langham, Jakarta is the stylish and contemporary 65-storey hotel leading the ultra-luxury hotel and lifestyle destination sector. This, the first Langham Hotel in South East Asia, is nestled within the new prestigious complex of District 8 at SCBD, in close proximity to the city’s most important financial, cultural and entertainment centres, and owned by Indonesia’s premier developer Agung Sedayu Group. 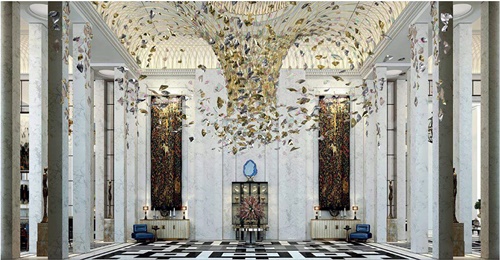 Upon entering the welcoming ground floor lobby, guests are mesmerized by the magnificent chandelier depicting 3,000 fluttering crystal butterflies, some of which are suspended by intricate wire work. Titled “Haven” by Lasvit, the renowned designers of dazzling bespoke light installations from the Czech Republic, the chandelier takes its inspiration from the Indonesian rainforests where butterflies fly freely. On being escorted to the 62nd floor Sky Lobby, you will find a 10-meter-high chandelier, also by Lasvit, that demands admiration. 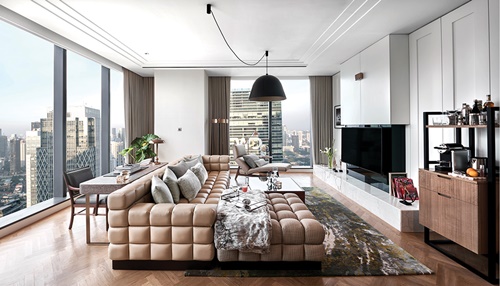 The hotel features exceptional celebrity restaurant partnerships that include Tom’s by Tom Aikens, the culinary maestro who has guided his restaurants to accolades by the Michelin Guide. T’ang Court, inspired by its Three Michelin starred Cantonese restaurant at The Langham, Hong Kong, makes its debut in Southeast Asia, and world-renowned Iron Chef Masaharu Morimoto from New York City will satiate gourmands with haute Japanese cuisine at Morimoto.

The Langham, London was the first hotel to serve afternoon tea in 1865, the same year as publication of Alice’s Adventures in Wonderland, the timeless novel. In Jakarta, The Langham’s afternoon tea legacy continues at Alice where guests may bask in the beautiful environs at the grand dining emporium. And for those familiar with the Artesian at The Langham, London, you will be delighted to know that its latest outpost is at the dazzling rooftop of The Langham, Jakarta. 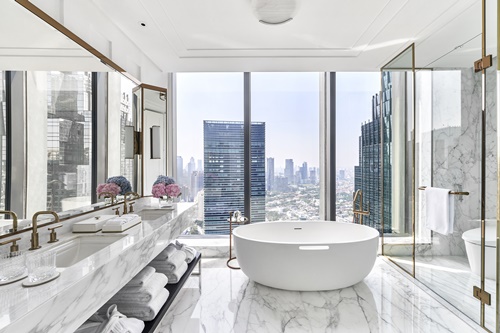 For social events, weddings, high-level conferences and luxury product launches, The Langham, Jakarta showcases more than 2,100 square meters of flexible space, including a magnificent 688 square meter ballroom and a beautiful outdoor garden. There are an additional 11 meeting rooms that may be configured for events requiring different capacities and settings.