Europe On Screen is Back! 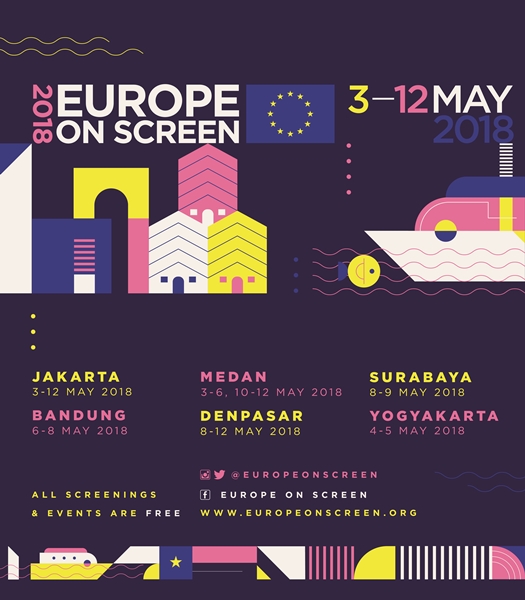 Europe on Screen, the longest-running international film festival in Indonesia, is coming back this year May 3-12.  More than 200 screenings of 93 films will be held this year in cultural centers, universities and new venues. EoS will also be held in shopping malls such as Bintaro Xchange and Gandaria City for outdoor screenings. Furthermore, this year the festival, dubbed EoS by fans, puts a spotlight on our shared responsibility for protecting the oceans as a resource for all mankind with the #OurOcean programme of documentaries.

The festival will open with The Breadwinner, an Oscar-nominated animated feature and international cop-roductions, including Ireland and Luxembourg, with Angelina Jolie as executive producer. The festival will close with My Big Night, a blockbuster comedy from Spain.

For the first time, EoS has organized a Short Film Pitch Project. Ten finalists selected from 122 submissions made during March will pitch their ideas to a panel of professional filmmakers. The three winning projects will receive production funds from EoS and the short films will premiere at EoS next year. Another special program, Film Talk: The Art of Subtitling, to be held at Universitas Multimedia Nusantara on May 7. Such a program is being held for the first time in Indonesia, inviting subtitling experts from France and Indonesia and a researcher who made a documentary on subtitling from the UK.

More information and the latest updates about EoS can be found online at  www.europeonscreen.org, on Instagram and Twitter at @europeonscreen and the official Facebook page of Europe on Screen.