The annual European Union Climate Diplomacy Week was launched last 24 October 2020 with various programs and activities related to climate change awareness that will be conducted from until 6 November 2020 .

On the launching ceremony, as explained by the Ambassador of the EU to Indonesia, H.E. Vincent Piket, the annual CDW will be covering 5 themes: forest, ocean, responsible production & consumption, urban climate action, greener economy. Programs are the initiatives awareness and part of implementation of the Paris Agreement concluded in 2015 and ratified in 2016. Indonesia’s commitment to the Paris Agreement is focused on actions in forestry, energy, waste management, agriculture, and industry, along with efforts in strengthening economic, social, and ecosystem resiliencies, in which both Indonesia & EU are the major players to focus in these actions. Also just on Mid 2020, the EU commission proposed its climate neutrality & a truly circular economy commitment called the EU Green Deal with the overarching aim of making Europe climate neutral in 2050. 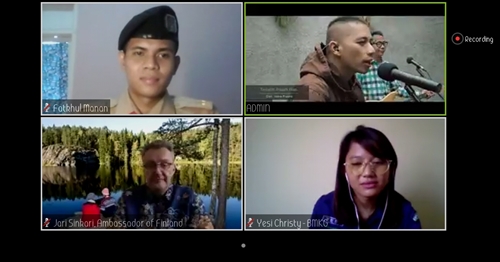 On this occasion, H.E. Jari Sinkari, Ambassador of Finland to Indonesia, also added that Finland, as the happiest country in the world, focussed a great deal of investment in education for youths, because the future environmental sustainability lays in the hands of the youth. 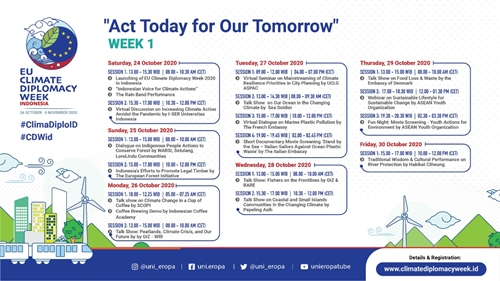 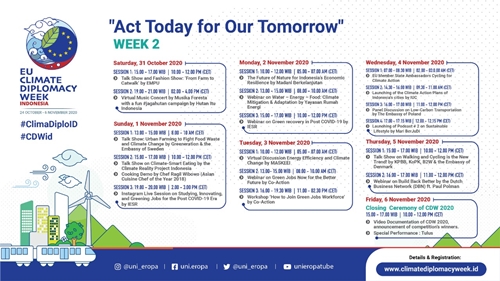 The launching ceremony is also the moment to introduce the CDW EU-Indonesia logo, which has the ‘mega mendung’ batik as one of the symbols. CDW 2020 will be presenting 34 programs during the 2 weeks, organized by 8 embassies from EU state members, 135 organizations from Indonesia involved, community groups, social societies, various activities ranging from movies, fashion show, coffee brewing, music, cooking demo, photography competition, design contest, podcast series, etc.
For full programs, check schedule at climatediplomacyweek.id