Shot and recorded by professional photographers and videographers, the exhibition highlights many things that Jeju is known as a beautiful destination. There are videos and images that cover Jeju Volcanic Island and Lava Cave that will introduce the gorgeousness of Hallasan Mountain Natural Reserve, Seongsan Ilchulbong Tuff Cone, and Geomunoreum Lava Tube System, which were listed as Korea’s first World Natural Heritage Sites in 2007.

Meanwhile, the Baekje Historic Areas coverage highlights the splendid cultural heritage of Baekje that covers the local’s living space, places of worship, and royal tombs in the area presented in different sections. 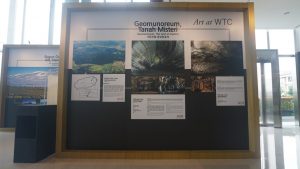 Jeju Volcanic Island and Lava Tubes, along with the Baekje Historic Areas, have been recognized for their landscape and geological value and were listed on the UNESCO World Heritage List in 2007 and 2015 respectively.

For more information and upcoming projects are available on isaartanddesign.com